Required cookies are essential to let you move around the website and use its features, such as accessing secure areas, shopping baskets and online billing. These cookies allow our website to provide services at your request.

Functionality cookies are used to remember the choices you make, e.g. your user name, log in details and language preferences. They also remember any customisations you make to the website to give you enhanced, more personal features.

Targeting cookies collect information about your browsing habits to deliver adverts which are more relevant to you and your interests. They also measure the effectiveness of advertising campaigns.

This site uses cookies and related technologies for site operation, analytics and third party advertising purposes as described in our Privacy and Data Processing Policy. You may choose to consent to our use of these technologies, or further manage your preferences. To opt-out of sharing with third parties information related to these technologies, select "Manage Settings" or submit a Do Not Sell My Personal Information request.

Our child seats combine everything we know about safety with beautiful Scandinavian design. Made with breathable 80 per cent natural wool fabrics, they are the most comfortable child seats ever.

Protect what is important to you with Volvo Cars child seats.

Safety has always been our number one priority at Volvo Cars. Safety for the driver, the passengers, other motorists and, of course, pedestrians. We have always been at the forefront of innovation in the field of safety — and child safety is no exception. Since 1964, when we first began testing rearward-facing child seats, we have progressively improved safety, ease of use and, importantly, comfort for your children when they travel in your Volvo.

Our unique approach to child safety includes creating and carrying out tests based on real-life traffic situations. This enables us to carefully monitor how each child seat reacts in a real-life car environment, and then tailor our designs accordingly.

As a result of our research we can strongly recommend that children up to the age of four years are seated facing rearwards.

To ensure you are protecting your children to the best of your ability, please watch this video to confirm you are using the recommended seat for your child.

At Volvo Cars our vision is that no one should be killed or seriously injured in a new Volvo car.

Please do not hesitate to contact us for further information. 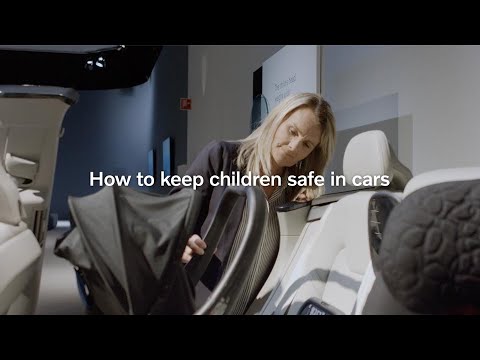 Designed to provide comfort and protection for infants aged 0–1 year, or who weigh approx. 0–13 kg, our rearward-facing infant seat features a deep shaped seat, high side panels and luxurious new charcoal-coloured upholstery, which is 80% wool and machine washable using a 30°C wool programme. The large carry handle is easily adjusted using one hand and the headrest can be conveniently altered from the front. The child seat weighs 4.5 kg and an ISOFIX base can be added.

We are always looking for ways to make your life easier. With our new version of the rearward facing child seat we have introduced a swivel function, which makes it easier to seat and secure your child. Once your child is secured the seat simply swivels and clicks into position. The swivel function can also be used when taking your child from the car.

Volvo Cars recommends children travel facing the rear until they are at least 4 years of age.

Featuring improved legroom, added tilt and recline options and luxurious new charcoal-coloured upholstery, which is 80% wool and machine washable using a 30°C wool programme. Our rearward-facing child seat provides optimal comfort and safety for children aged 9 months to 6 years or who weigh approx. 9 - 25 kg. The child seat weighs 7 kg and is easy to install, adjust and remove thanks to its compact design.

Our child booster seat is designed for children aged 4 - 10 years or who weigh approx. 15 - 36 kg. The padded headrest, high side panels and shoulder protection ensure a safe journey, while the luxurious new charcoal coloured upholstery, which is 80% wool and machine washable using a 30°C wool programme, guarantees a comfortable one. The seat weighs 6.4 kg. The ISOFIT system holds the seat securely in place, even when a child is not sitting in it.

Designed for children aged 4 - 10 years, or who weigh approx. 15 - 36 kg, our booster cushion with backrest helps to position the safety belt appropriately to provide children with the same high level of comfort and safety as they grow. The booster cushion and backrest features luxurious new charcoal-coloured upholstery, which is 80% wool and machine washable using a 30°C wool programme, and the backrest can be adjusted for improved rest/sleep position and features five different height settings. The booster cushion with backrest, which is also available with a comfortable nubuck leather upholstery, weighs just 3 kg.

The booster and backrest can be purchased separately.

More than nine in 10 UK parents are using inappropriate child seats when they drive with children, according to Volvo’s safety experts. Research by the safety-conscious Swedish car company found the vast majority of parents were using front-facing child seats when their children should still be in rear-facing seats.

According to the study, which surveyed more than 2,000 Brits, 94 percent of parents who have primarily used a front-facing car seat for their child did so when their child was four years old or less. That goes against Volvo’s advice that rear-facing car seats should be used up to the age of four – or as long as possible – to reduce the chances of injury in the event of an accident.

Volvo claims young children’s necks are not strong enough to support their necks in the event of an accident, and the organisation’s senior technical specialist in injury prevention, Dr Lotta Jakobsson, said rear-facing seats could save a child’s life in a high-speed crash.

However, Volvo’s research also revealed how early drivers are swapping rear-facing seats for front-facing ones. According to the survey, one in five parents (20 percent) has used a front-facing seat before their child reached six months old.

As a result, the company has created a Care Key, which allows parents to pre-set a maximum speed of the car before the teen gets behind the wheel in a bid to keep them safe on the road. This feature can also be used on other occasions, such as when entrusting their car to valet parking attendants.

“Distraction, disturbance and anything linked to inattention while driving is a hazard,” said Malin Ekholm, head of the Volvo Cars safety centre. “Technology is moving forward, so we want to start addressing these hazards with a safety feature that allows parents to be able to decide what is a reasonable speed for whomever they’re lending the car to.”

Company Info
Back to Top

FINANCIAL DISCLOSURE
Grafise Limited are a credit broker and not a lender. We are Authorised and Regulated by the Financial Conduct Authority. FCA No: 310118 Finance is Subject to status. Other offers may be available but cannot be used in conjunction with this offer. We work with a number of carefully selected credit providers who may be able to offer you finance for your purchase.
Registered in England & Wales: 09766476
Registered Office: Address: Sterling House, 178 Buckingham Avenue, Slough, Berkshire, SL1 4RD
Back
Compare Saved Vehicles
Top
Close